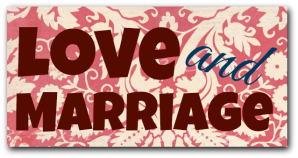 I asked my husband to help me write a post this week and he chose to give me his top 5 reasons for loving begin married. He has the knack for expressing himself clearly and also has the ability to discuss things that I just can’t discuss. Thank you, babe, for contributing to this series and for ALL you contribute to this marriage. I love you!!

Why I Love Being Married

My wife and I were married young by the standards of late 20th Century American culture. My bride was 19 and I had turned 20 a mere three weeks prior to our wedding day. Consequently I’ve been married for almost all of my adult life. We’ve weathered many storms, seen other couples’ marriages end in divorce, heard all the criticisms and complaints against marriage, and listened to all the supposed virtues of the “single life.” Yet 17+ years and five kids later I can unequivocally say that I absolutely love being married.

It is no secret that married life gets a bad rap. There are a number of cultural factors that contribute to the poor estimation of marriage in public opinion. However, I’m not going to elaborate on those matters. I will instead focus on what I love about marriage and being married. It is my hope that if you are married these reflections will stimulate your thinking and cause you to appreciate your marriage more. If you are not married, my hope is that this post will encourage you to desire marriage for yourself.

Without further ado, I present the top 5 reasons I love marriage:

1. Marriage is a picture of God’s relationship with his people

Marriage has always been a key picture of the relationship God has with his people. In the Old Testament God refers to himself as Israel’s husband (eg, Isa 54:5, Jer 31:32) and Israel’s unfaithfulness is depicted as that of an adulterous wife (Hos 1:2, Ezek 16:32-34, etc). In the New Testament Jesus uses wedding imagery, specifically the notion of a bridegroom, in reference to his ministry on earth (Matt 9:15, Luke 5:34-35, Matt 22:2, John 3:29, etc.). In the epistles we learn that these references to wedding ceremonies by Jesus were not accidental because the marriage relationship itself is a picture of His relationship with the Church (Eph 5:25-33, 2 Cor 11:2) and in the final day the church will be presented as a bride to her husband (Rev 19:7-9; Rev 21-2,9-10).

When you marry you get to be a part of the telling of a grand narrative: the story of a Great King who became nothing in order to rescue, purify, and beautify his Bride. How you live as husband and wife either tells the truth about this Great King and his Bride and how they relate, or you tell lies by your words and treatment of each other. But either way you are part of the story. This next sentence may sound audacious, but here goes: If you’re not married, you’re not an actor in this re-presenting of the King’s Marriage at all; you only get to watch others present it. I love being in a relationship of covenant that gives me glimpses of the relationship of covenant God has made with me in Christ. If it were not for marriage we would not have this picture.

Augustine, the Bishop of the North African city of Hippo and arguably one of the most brilliant men ever to have lived, wrote a treatise in AD 401 entitled De Bono Coniugali, or “The Good of Marriage.” In this work, by employing the phrase “sacramental bond” in regards to marriage he unfortunately laid the groundwork for the later Catholic theological development of marriage as a sacrament – a formal means of grace.

Technically speaking, marriage isn’t a sign and seal of the covenant of grace that God promises in his word to communicate grace to us. However, in the vein of Prov 27:17 and “iron sharpening iron,” I can easily say that there is no relationship that affords us much opportunity for sharpening, refining, and perfecting as does marriage.

In no other relationship are the interests of one so vested in the interests of another. In no other relationship do the actions and reputation of one have bearing on the other. In no other relationship does another person have unfettered access to us, and our shortcomings! As such the marriage relationship becomes the matrix in which I am most readily able to put my religion into practice, in which I am most often confronted with the horrible realities of my own sinfulness, and in which I am able to see the transforming effect of the Holy Spirit in the life of myself and another so clearly. In a very real way, marriage is the crucible of our sanctification – not as a means of grace, but as the context in which the means of grace applied to our lives does their work in “real time.” Marriage grows and stretches us. It calls us to maturity and to responsibility. It leads us to consider others and to persevere in relationship when the going gets rough.

I and countless others agree that we are much better people because of marriage. If you are not married, you are missing this refining opportunity and the irreproducible extreme proximity it affords to see the Holy Spirit’s work in the life of another. If you are married, I encourage you to celebrate the opportunities your union has given you for increased growth in godliness.

“It is not good for the man to be alone.” God himself says so in Gen 2:18. We were created for a purpose. It is no wonder we are creatures that desperately seek purpose for ourselves and we languish away and die when we become truly convinced we have none. Part of that purpose is reflecting the unity amid diversity of God in relationship. The fact that after having made the man God then took a rib from his creation’s side in order to make the woman is astounding: The woman was made “like, but unlike” the man. We are like each other enough and in such a way as to be able to relate, and unlike each other enough and in such a way that we might be able to relate as complements. There is a distinct difference between the way two equivalents relate and the way two complements relate. We instinctively know that someone “just like me” might be fun, might be loyal, might be trustworthy, might be a whole host of things, but one thing “just like me” isn’t: satisfying. The differences between the masculine and feminine outlook, perspective, and priorities mean that even when there are shared interests and opinions, the vantage point is just different enough that a more robust view is had.

We need not only the benefit of complementary genders for true companionship; we also need the benefit and security of the marriage covenant. Marriage brings a distinct sense of comfort that I am not alone and that there is someone on my side. I love having someone who shares life with me, and not only when it is convenient. If you are not married you get the benefit of friends “when they haven’t made other plans.” I love having a life companion, and if you’re married I encourage you to celebrate the fact that you have a companion for your life too.

On the face of it this might seem rather passé. Namely, if modern culture has shown us anything it is that you don’t “need” marriage to procreate. However, the studies are legion which show the overwhelmingly negative statistical consequences of single parenthood. But I don’t want to talk about sociology. Instead, I want to talk about the fact that God has instituted marriage for the procreation and nurturing of godly offspring (Mal 2:15). Children are a heritage from the Lord (Ps 127:3-5).

I am thrilled that in marriage I get to be a part of a stable relationship governed by the structures of covenant in which Jesus is King. In this union, 5 children have been entrusted to us for the purpose of us raising them up in the fear and admonition of the Lord (Eph 6:4). This is a precious privilege, and not a burden. If you’re married don’t view your children as a burden or an obstacle preventing you from having fun. Instead, celebrate the fact that you have been entrusted by God with the task of bringing up the next generation of His people!

Ok, I’ll just say it: I really enjoy sex. Without a legitimate outlet, I’d definitely “burn with passion” (1 Cor 7:9). The good news is that the Word of God has a lot to say positively about sex. When I lead marriage retreats I teach a class on sex and it is always well received because so many are unaware that the Bible celebrates sex within the covenant of marriage. Take for instance Prov 5:18-19, in which the Lord’s blessing is pronounced on finding lasting sexual satisfaction in your spouse. I encourage you to take the time to study the topic – you might be surprised!

Suffice to say, I am floored that God is pleased when we, as husband and wife, give ourselves to engage in the enjoyment of the other’s physicality. If you are not married, you’re missing out. If you are married, I encourage you to praise God for and celebrate this aspect of your personhood with as much gusto as your health will allow.

So there you have them. My top 5 reasons for loving marriage. Have a great week!

This is part of a blogging series Love and Marriage.

You can find Ben’s wit and charm at: thebenaddiction.