I am putting together a Friday Fragments, but I am unsure if I will link it in.  We lose our internet connection this weekend before the move and I do think that people who link in should go about and read other people’s posts.  It would be rude not to, and I just can’t guarantee my ability to do that.

— well I didn’t get this ready by Friday so I guess it has to be renamed now, right??

–My best friend sent me an email this week. So I guess I better get something posted before she really gets edgy 😉

“Alright, Kay, I’m calling you out! You don’t leave until May 31st. Get on here and blog something!!! I’m sick of reading CNN over my lunch break!”

–I have been watching some fun old movies recently.  Have you guys ever seen:

The Ghost and Mrs. Muir
Mrs. Muir is a military widow with a daughter.  She wants to be independent and away from imposing relatives.  She uses the money being earned by her husband’s mining shares to rent a cottage by the sea.  The cottage once belonged to a salty sea captain and it is rumored that he still lives there now.

The Unsinkable Molly Brown
Molly Brown is found floating among the debris of a Colorado flood.  She is raised by a back woodsman and has the mouth to prove it 😉  She desires to have a home where the roof doesn’t leak, there is indoor plumbing, a brass bed, and 2 stoves: one for cooking and one for heating.  She has big dreams and won’t be swayed from them by anyone… not even the handsome man she meets on her journey.

This movie has enough colorful language that I chose not to let my kids watch with me.

A computer glitch has thrown a wrench into the life of this relationship doctor.  She has to hunt down the man she is supposed to be married to, get a divorce, and get that finalized before her ‘real’ marriage takes place.  The glitch is no accident!  It was concocted by a man whose fiance broke off the engagement thanks to the good doctor’s advice, he’s in it for the payback.


Have you ever asked yourself “what if” after a decision has been made?  This was an intriguing and emotional tale of a woman’s life who made the train she was hoping to catch… but what if she didn’t?

–We hit the PO twice this week.  What insanity.   we mailed off some stamps that are going to my FIL coming from hubby’s great uncle. Such cool antiques. We also shipped off clothes for nieces and nephews in Iowa.

–Speaking of shipping things, we went to the Port of Baltimore this week to ship off the car to Alaska. The port smells like nasty rotten fish and pungent salt water. It was unpleasant to say the least. And I love the beach. This was different, very different! And very busy!! Tons of trucks bringing cargo to the port, which means that fish smell was laced with diesel fumes 😉

— An email from my best friend:

Speaking of that, last night Asher was up in the tree with his friend from down the street, and all of a sudden he starts hollering for Daddy like he’s about to fall out of the tree. So we go trucking back there and Asher goes, “Daddy! Isaiah doesn’t believe in Santa Claus!” Mike said, “That’s okay. Everybody can believe whatever they want to believe.” And as we were walking back to the front, I heard Asher say, “That’s okay. You’ll still get presents, even if you don’t believe in Santa Claus.”

–I had planned to get some things ready for next week when the packers are here but I just can’t get it all together from my iPad. I need linkys and such. But I came up with a new and fun Friday thing: Name That tune. It’s actually a game many of my friends play with me, usually via texting. We all love the 80’s and 90’s hair bands so we begin a song quote and see who can finish the line or name the tune.

Name the band or singer and which song this came from…(extra points for finishing the line correctly.

“Step inside, walk this way…”

(of course we are starting with my all time favorite) 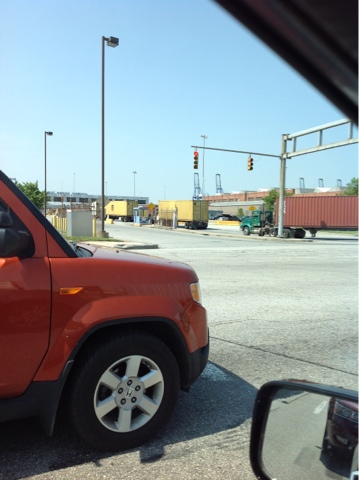