For all the military spouses I know out in blogland and beyond:

I have the privilege of being an Army wife…the real kind, not the Hollywood “make-up” version that doesn’t abide by rules and enjoys a lot of creative licensure. I am an Army wife, complete with the moves every 2 years, the missed birthdays, anniversaries, being miles upon miles away from family/friends, lonely deployment nights, and the tears when I pick up the phone to hear “Hey, babe, I’m okay.”

But I happen to have a unique experience: I have served as the soldier in our family. I was a Reservist/National Guard soldier for just over 10 years of my life. The last 2 of those years was spent on active duty status after a crew of extremists flew some planes into American buildings. I experienced nights away from my family, I experienced the split thought patterns of having to perform my job while still praying my family was safe at home. I had the heart breaking experience of missing my children’s milestones and having children angry with me for ‘leaving them’. I have had the pressure of the PT test hanging over my head, knowing that failure meant a loss of income that we needed!

I must confess to you now what this picture conveys: I don’t believe my life as a military spouse is harder than that of the soldier. I heartily believe that my husband has it worse than I do. He did as a junior enlisted guy in Ranger Bat and the Infantry, and he still has it rougher than I do.

I have been to Basic Training where I had spittle on my face from the Drill Sergeant screaming just a hat brim length away. I have: road marched in the rain, had to wipe the gunshot residue out of my eyes while trying to qualify with my M-16, dragged myself through mud under Constantine wire, run miles wearing the soles off my shoes, wrapped mole skin around blistered feet, eaten cold eggs from a mermite can, I have had the pressure of trying to make numerous bosses happy when they rarely are, and had the unpleasant experience of doing what I am told even when it seems truly stupid and pointless. Being a military spouse is hard in many ways, but I believe that being a service member is harder. You are often stuck between an unhappy spouse and your duty…guess which one has to win out? 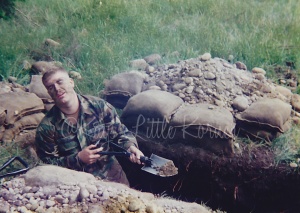 I simply want to remind my fellow spouses that, yes, while our job of supporting and dealing with so much of the military stupidity is hard…I truly believe we don’t have it as bad as our spouses do. Be gracious and thankful when people appreciate you as a military spouse, and remember who it is that YOU are supporting. Let’s remember to thank THEM for dealing with our outbursts at military time frames (or lack thereof), our grumps over missed occasions, our PCS stress, our lonely nights whining, and the inevitable blame game when tragedy strikes during deployments.

The best part of being a military spouse is that you are making a soldier’s duty worth something! You are the light at the end of their tunnel. You are the ‘safe place’ they land in at the end of a duty day. You are the voice of love at the other end of the line. You are the picture that they keep in their tent/rack, reminding them of why the heck they are doing this…

Be an awesome military spouse!!