Have you ever considered the debate of evolution versus creation?

Before taking my Life Science course, I had been moved by a sermon I heard delivered by Mark Driscoll called Creation God Makes which helped me to base my creation beliefs in the Biblical account. But I hadn’t really engaged with evolution as a theory, I hadn’t studied what evolution means or what it all entails.

After taking Life Science at Moody, I can now way that I have studied evolution. I appreciate that, while I took science at a Christian school, my professor used a secular book and forced me to interact with it. My undergrad course dove heavily into evolution as we read about cell theory and physical science at the molecular level. The author stated that science is about observing, creating a hypothesis, and then testing the theory to see if it holds up scientifically. After engaging with this subject, I would like to outline my major concerns with evolution and how I feel they have failed to meet their own criteria concerning evolution.

The evolutionists do admit they have a lack of evidence to support their cell zero to hero theory. There is no evidence that complex life forms evolve from primitive life forms because no such transitional species between any of these groups of animals have ever been found in the tons of fossil-bearing rock recovered over the past one hundred thirty years.

The world in which we live, down to the very structure and behavior of cells, is orderly. The cycles of cellular function must be maintained or the ‘factories’ shut down. The balances in nature are necessary to sustain life. In their own example of the ecosystem, a tipping of the scales will throw the whole system off, probably to extinction. And yet, they hold fast to the evolutionary process of primordial soup dividing and conquering the world. Would a creature evolving survive long enough to procreate another creature that would continue the evolutionary process?

Evolution is a theory designed around the concept of natural selection. There are two basic facts of this process:

Through this process of natural selection, nature ‘selects’ those characteristics that will be propagated in any given species.

This natural selection sounds very American with the little guy cell pulling up his boot straps and fulfilling his true potential. However, positive cellular mutations do not guarantee excellence. We would need a series of beneficial mutations (repetitive beneficial mutation) to better a species and the mathematics behind this are not pretty. The chances of getting three (just three) related mutations in a row is one in a billion trillion… that’s 10 to the 21 power. You don’t have to be a mathematician to see the improbability of that fact.

Lucy and the Neanderthal

One of the crown jewels of the evolutionist’s origin of humanity is Lucy. She is a skeleton found in Ethiopia that evolutionists are convinced is part of the ‘missing link’ to the evolution process. While it is always exciting to discover something from our ancient past, we must recognize that these discoveries are presuppositions and a lot of guess work. The Lucy skeleton has no hands and feet. This leaves a large part of the skeletal information to guessing. She also does not have a complete skull or unbroken pelvis. The holes mean that scientists must theorize on the complete image. Would the theory hold up if scientists placed Lucy next to the remains of Ramses the II who was also small in stature, from the general vicinity of Africa, and was privy to the best diet available in ancient Egypt? Have they done any comparisons of Lucy outside the boxes of evolution to determine if their theory needs adjusting?

The issues that exist with the Neanderthal man also involve presuppositions. Evolutionists who reject Creation believe that the neanderthal people are our ancient ape/brothers. When they were first discovered, they earned themselves the image of being barely civilized, knuckle draggers. Scientists have since realized that these people must have been more intelligent like homo sapiens because they crafted tools, and buried their dead. The most fascinating fact of the neanderthal is their sudden extinction, as an entire people, just before the homo sapien arrives on the scene. Evolutionists are baffled. Creationists attribute this to a massive, world-wide flood.

Also, Mr. Neanderthal looks very different depending on who is reconstructing his face. The truth is, without skin and hair to assist with this step, it’s a lot of guessing and supposing. One of the images below was reconstructed early on when scientists were convinced he was mostly ape and ignorant. A more recent reconstruction of a neanderthal skull from Iraq. You don’t notice any influence for their reconstructive artistry, do you? 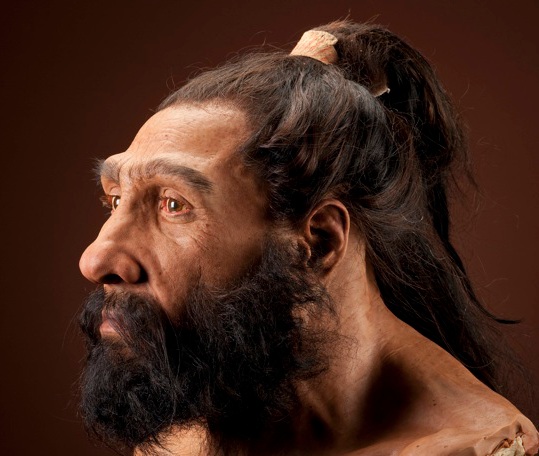 If you happen to be an evolutionist, I would challenge you to to be as open minded as you claim to be in engaging with the challenges of the evolutionist theory. Faith is involved with both historical views, yet evolutionists seem to despise this in the Creationist.

We never stop questioning the validity of our hypotheses, theories, or laws of nature. Scientists constantly think up new, more rigorous experiments to test the limits of our theories.
Trefil, The Sciences, 6th ed.

For more information or to study this debate yourself, you can visit Creation.com (they have a wonderful welcome video, worth the click for just once) for up-to-date articles and videos for your educational pleasure.